Amsterdam Dance Event – or ADE for insiders – celebrates its 20th anniversary. It has grown in size on the tail of dance music’s steady rise in global popularity over the last ten years. In its early incarnations, the event presented a series of showcases at Amsterdam’s leading club venues; for some years now, the organizers claim ADE serves an audience of several hundred thousand dance fans. The press release for this year’s edition, the 21st, expects 375.00 visitors from The Netherlands and abroad. Has ADE hit its ceiling? Is there any stretch left? 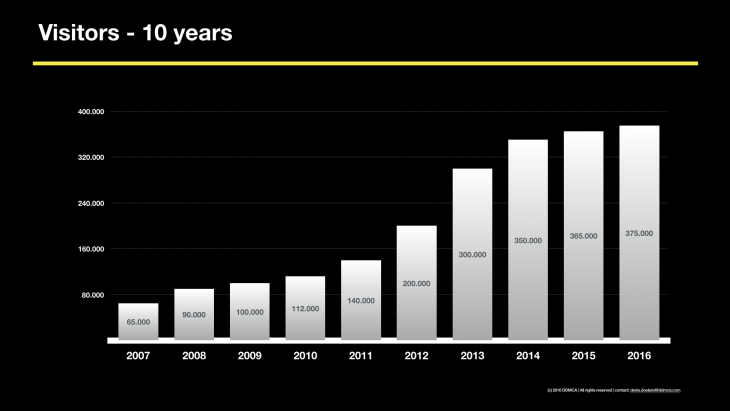 Prediction according to the bell curve

In statistics, the normal distribution is also known as the Gaussian distribution. The graphic representation of the most common or standard normal distribution is the bell curve (a.k.a. the Gaussian curve). The bell curve represents a great many of things in life, for instance the distribution of height in a population, and it seems fair to use it as a model for the life cycle of a product; or the evolution of a festival. The bell curve’s properties (standard deviation, modal class, median, variations) can be used to explain and predict the life cycle of festivals and events.

ADE has grown significantly in the twenty years since its inception. Last year, close to 2.300 artists and acts performed on a hundred stages; over 500 speakers traded business insights at nine conference locations. The 2015 edition of ADE attracted 365.000 visitors to its plethora of events. Looking at the numbers published by ADE’s organizers over the last ten years, the event has grown from 60.000 visitors to the 375.000 expected for this year. These numbers – in other words, this type of growth – suggest a bell shape. It implies that the event is likely to hit its ceiling in the near future. 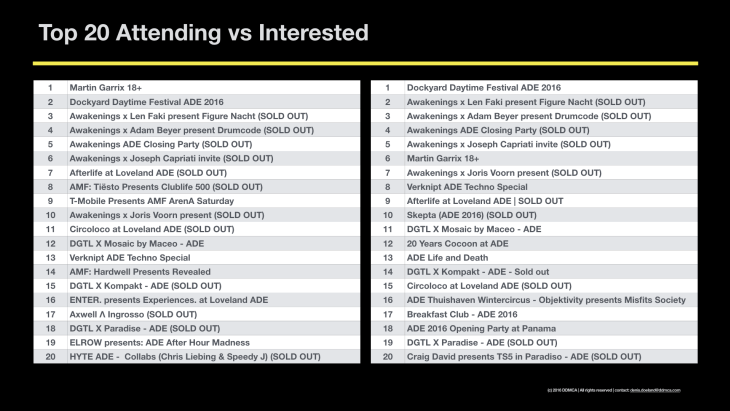 As of now, Dance Monitor 2016 specifies 135 ADE-related events. These are events at venues with an estimated capacity of 500 or more. The average ticket price for these events is circa 25 Euro; 20 Euro for early birds. The average servicefee is 2,63 Euro. Many of these data are published on the websites of dance event producers. However, Facebook offers some insight as well.

285.000 people are interested in an ADE-event; of these, 53 % is unique. 77.000 people (83 % unique) do not react. The Facebook-indicator offers a glimpse of the ADE-visitors’ behavior. It shows that in October they will put on their dancing shoes and visit the ADE events. 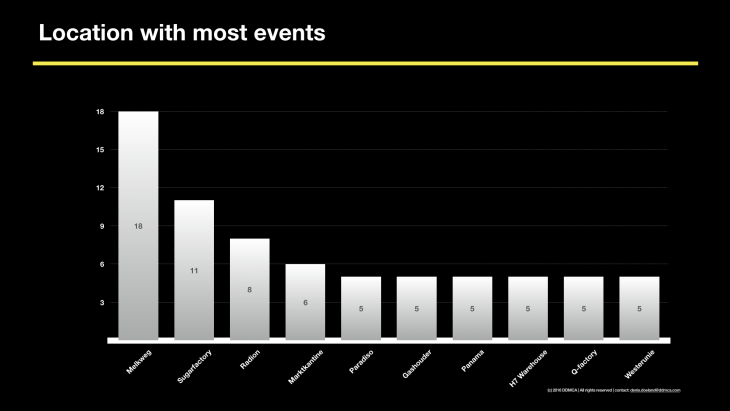 The monitor offers more interesting insights. In terms of popular genres, house, techno and electro are leading. Slightly more than half the events offer a 500 to 1.500 capacity. De Melkweg (Milky Way) hosts the greatest number of events, followed by Sugarfactory and Radion. The people who have indicated they will visit an ADE-event prefer the show of dj Martin Garrix, Dockyard Daytime Festival, the series of Awakening nights and Amsterdam Music Festival in particular. At the time of writing, 17 % of the events sold out.

Over 400.000 people are interested in or visiting ADE. For its organizers, this is ADE’s potential. It suggests ADE has some stretch left: it expects 375.000 visitors. ADE’s Facebook-page has close to 500.000 fans. Plenty of potential, or so it seems.

However, on Facebook the grow curve appears to flatten out. This is confirmed by the number of expected visitors – or expected number of visitors – as published by ADE’s organizers. Is ADE’s peak in sight after all? If all the expected visitors will attend this year’s edition, the event has grown just 3 % in size (in terms of visitors) since last year. That number was 4 % for 2015, and 6 % for 2014.

Is it possible to predict how many people will visit an event? It is possible to create viable predictive models, using historical data, behavioral data (via social media) and additional data from third parties? At the moment, we are working in a team to produce predictive analyses. Considering the number of festivals in Dance Festival Monitor 2016 (over 400 a year) of over 300 unique brands, one thing stands out. You do not have to be a rocket scientist to notice that the festival market has reached its peak. In my view, only predictive models can limit the financial risks for its organizers. It is a tempting challenge to realize this predictive model.

The upcoming years will be interesting for the organizers of Amsterdam Dance Event. Based on, amongst others, data from social media it will become possible to predict how events will fare in the future, ADE included. The first insights are here; not yet fully accurate, but the picture it outlines speaks for itself. To be continued.

EDM and the Digital Domain